As we head into the new school year, quite a few questions surrounding the Janus decision remain, and many of them have been directed our way. Hopefully we at CTEN can clarify a number of these issues for you. (By the way, there is good news for teachers who have been fair share payers; please see pasted in letter from CTA at end.)

The #1 question we get is “When must the union release teachers who want out?” First of all, make sure you let your union know your wishes in writing. The National Right to Work Foundation has provided teachers with an easy-to-fill-out template that you can use to resign. To access the form letter, go here.

How the union will respond to your resignation/revocation letter is uncertain at this time, and we are not sure exactly when it is legally bound to release you. The union may try to make you pay dues until the current bargaining agreement is up. The federal courts ruled prior to Janus, however, that such a restriction on your right to “resign and revoke” violates your First Amendment rights.

Also, the union may say you can only leave between dates that it specifies in the membership application, dues deduction authorization, its own bylaws or collective bargaining agreement. Any hoops the union tries to make you jump through are probably unconstitutional, and very possibly will be met by a legal challenge. Please send CTEN any communication that the union sends you on this matter, if it does not immediately honor your resignation and revocation requests. We very well may be able to get you free legal help, and at the same time, assist others who are in the same situation.

One of the more frequently asked questions is about loss of liability insurance if one quits the union. The Association of American Educators and Christian Educators International have this benefit covered quite well. Membership in either organization will take care of your legal needs for a lot less than the cost of union membership. In fact, AAE has just upped its coverage without raising its membership fee. From a recent press release, the professional educator association has doubled its job protection benefits for members without raising dues.

Throughout their career, educators can experience workplace issues that threaten their job as well as their professional reputation. Along with liability insurance and protection against lawsuits, AAE professional membership includes employment rights coverage for members experiencing termination, demotion, involuntary transfer, suspension, or other disciplinary actions. By including job protection benefits in each member’s liability insurance policy, AAE is able to provide legal support at the onset of workplace issues while still charging only $198 per year to members. The doubling of each of the three levels of job protection now covers up to $10,400 in legal fees paid by the insurance policy to defend each member’s due process rights for covered incidents.

Also, we have found that many teachers like their local union, but see no reason to also belong to the state and national unions. Among other issues, the majority of your union dues payments here in California get shipped to the California Teachers Association ($700 a year) and the National Education Association ($192 a year). If you are interested in keeping your local but disaffiliating from CTA/NEA, we suggest contacting Rafael Ruano at (888) 993-1600. More information on this option can be found here.

Additionally, in light of the new national teacher freedom legal decision, several new informational websites have sprung up. Former SCOTUS plaintiff and CTEN board member Rebecca Friedrichs has inaugurated “For Kids and Country,” a very informative website which covers a myriad of education and union issues. To access the website, go here.

And you might want to check out, Teacher freedom.org, a national clearinghouse that focuses state by state on “opt out rights, association options, limitations and misconceptions.” To learn more, go here.

Once again National Employee Freedom Week is upon us, which runs from Aug. 19-25 this year. The NEFW website informs us that the “Janus decision is simultaneously one the of most significant labor decisions in our lifetime -- and only the beginning of our next phase of activity.” To learn more about NEFW, go here.

While many union-related questions still need to be answered, one seems to have been dealt with in a most definitive way.  In the run-up to the Janus decision, some thought a victory for the plaintiff would lead to the teachers unions becoming more politically balanced…that they would embrace at least some conservative candidates and causes as a way to ensure the uninterrupted flow of union dues. Others suggested the unions would double down and choose ideology over money.

The National Education Association convention at the beginning of July gave us a clue which theory would become reality when the union passed quite a few liberal New Business Items, maintained its lopsided leftward political spending, and gave quarterback Colin Kaepernick a human rights award. And here In California, CTA continues its one-way spending on progressive initiatives, and endorsed 35 state legislators in the June primary – all Democrats.

Right after the NEA convention, the biannual gathering of the other national teachers union, the American Federation of Teachers, left absolutely no doubt as to its future political direction. On Day 1, Hillary Clinton received AFT’s Women’s Rights Award, which is given to “a woman whose vision and courage have raised the game for other women.”

And then there was Bernie Sanders. The socialist Senator from Vermont took the stage and had the crowd on its feet as he maintained that it is good news that, “all over this country, people are standing up and fighting for a progressive agenda. There is a political revolution sweeping across this country.” He then claimed that the Supreme Court does the bidding of the powerful, and that “racism, sexism, homophobia, and xenophobia are threatening to cripple America.” In fact, the resolutions passed by the union at the convention would make any socialist proud. Universal health care – whether single-payer or MediCare for All, full public funding for, and free tuition at all public colleges and universities, and universal, full-day, and cost-free child care are what AFT wants for the country. Additionally, the union resolved to double per-pupil expenditures for low-income K-12 districts and to “tax the rich” to fully fund “IDEA (Individuals with Disabilities Education Act), Title I and state allocations to public colleges and universities.”

The point here is that the union has a right to support any politician or cause it wants. But post-Janus, no teacher has to fork over their hard-earned money to a union whose politics are very different from theirs. Teachers who are right of center, libertarian or even apolitical need to think about paying any money to the union. Now that agency fee status is no more, a teacher cannot opt out of the political portion of union dues. It’s either you’re 100 percent in or a 100 percent out.

The new school year is a very busy time for teachers and CTEN will do its best to keep up with post-Janus doings in addition to any other issues pertinent to education and teachers, and inform you as things happen. If you have any questions, or have experienced any problems because of your decision to leave your union, please let us know, and we will do our best to help you in a timely manner. We will also be able to share your concerns with other teachers across the state. And talking about sharing, please pass this email along to your colleagues and encourage them to join us.

Also, anyone wishing to donate to CTEN can do so very simply through check, money order or PayPal - http://www.ctenhome.org/donate.html  As a non-profit, we exist only through the generosity of others. Thanks, as always. And happy new (school) year! 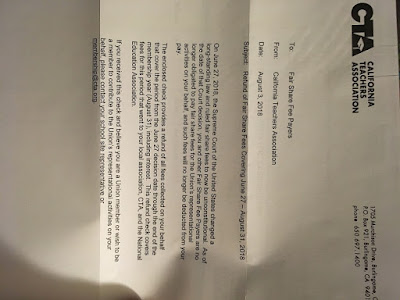